Randy & Pamela Moore purchased Interstate Auto & Tow in April 2001 from previous owners. Randy was a heavy duty mechanic from the age of 16. He started working at Affiliated Food in Elwood, Kansas at 16 in 1975. He worked at Affiliated Foods until 1993 when he went to KCR International as a mobile maintenance mechanic.

In 1997 a large company approached him about maintaining their entire fleet of trucks exclusively, and Moores Truck Repair was started then. He maintained a fleet of 50 vehicles from oil changes, tires, brakes and A/C etc, until 1997 when the company decided to build their own shop and asked him to run the facility.

At this time he decided to stay in business on his own and found Interstate Auto in Kearney. In 2016 Interstate Auto had their current location, a brand new larger, more state of the art shop built. Randy has over 40 years in the auto industry and no plans to stop working on vehicles any time soon.

Randy and Pam live in Kearney, have 2 children and 5 grandchildren. They enjoy camping and Randy enjoys riding his motorcycle.

Angi Lawrence, Office Manager
Angi Lawrence lives in Kearney with her husband and 3 daughters, all who attend Kearney schools.

She has been at Interstate Auto since 2008. Her family enjoys four wheeler riding, fishing and softball. 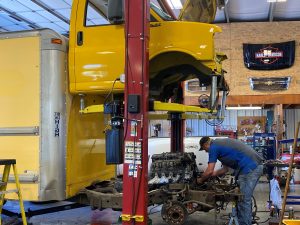